The Asia New Zealand Foundation Leaders Network is a global network of young professionals working in some way connecting Asia and New Zealand…business, education, diplomacy, culture…many different areas are represented. I’m very happy to be a part of the network, and had the chance to travel to Xian, China, for a meeting of network members connected with North Asia. 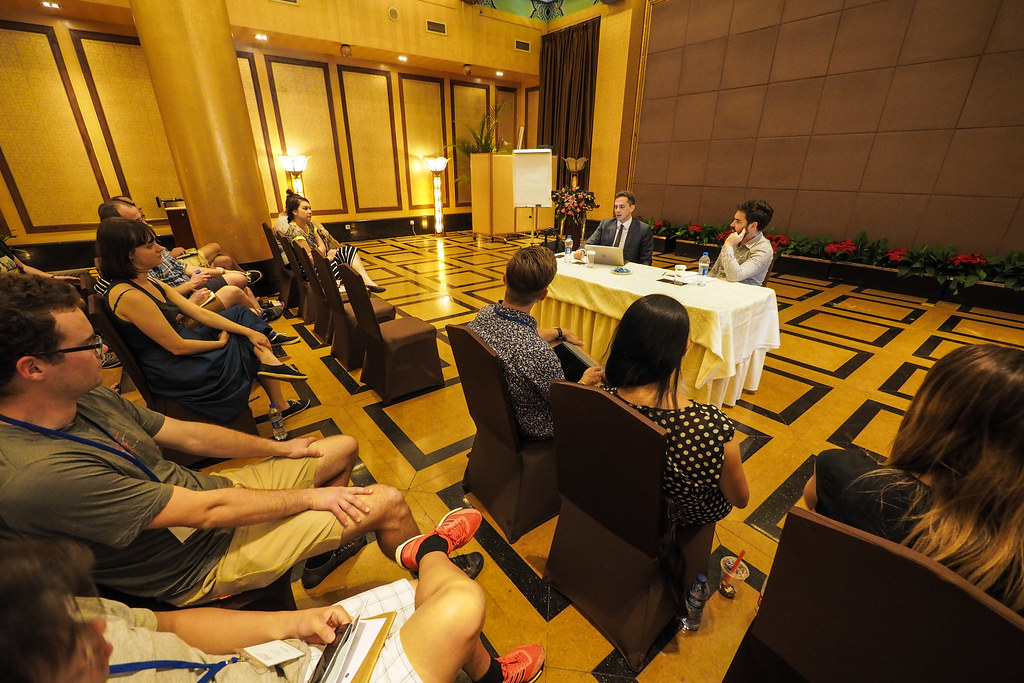 Officially, the meeting was called the ‘North Asia Hui’. ‘Hui’ is a word, used in New Zealand, originating in the Maori language, that means a social gathering or assembly. Over the three days the 30-odd network members were together (I also spent a couple of days prior to the Hui cycling over a mountain pass), the hui was made up of a mix of a few structured lecture/discussion sessions, and a few excursions that were great for facilitating networking among the members.

A highlight of the lecture sessions was the one with Financial Times Beijing Bureau Chief Jamil Anderlini (above). Jamil is originally from New Zealand, and shared some off-the-record frank opinions and ideas about China’s internal and external state of affairs. 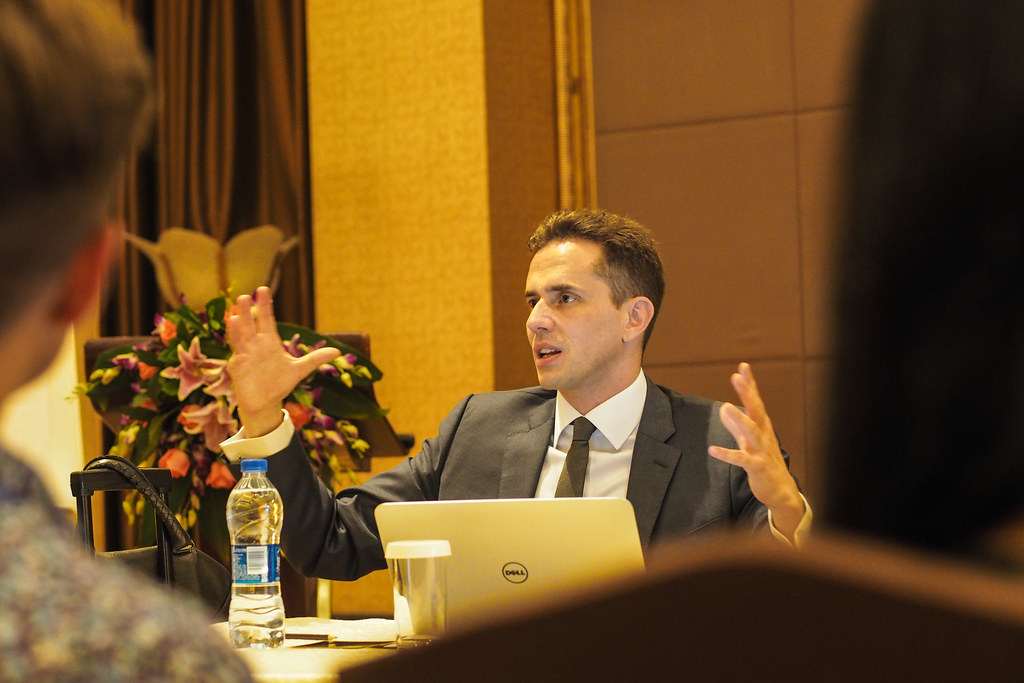 Starting off this wee report of the Hui with some formal-looking sessions like this probably makes the Hui look all rather serious and academic. But in reality, perhaps the most valuable part of the Hui was the time spent with other network members, all with one key thing that tied us all together: a passion for North Asia. 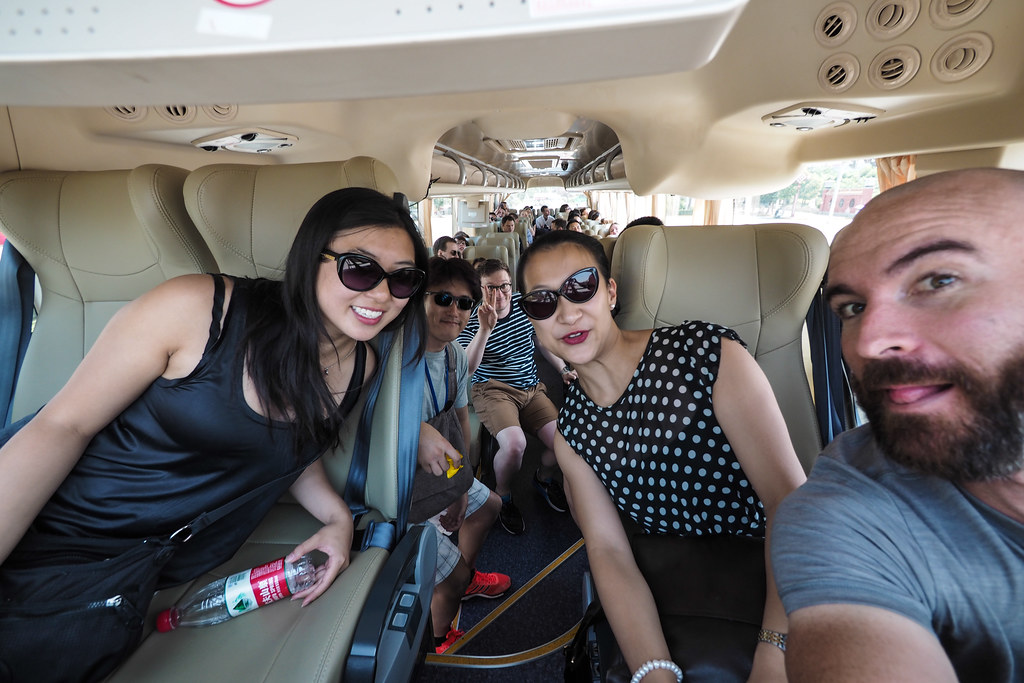 The Leaders Network itself is quite young. I joined it in it’s early years in 2009, and it has grown well, but is still only around 8 (?) years old. I think that the true value of this network will be seen in another 15 to 20 years, as New Zealand’s economy and human relationships with Asia become more intertwined and current members will then be in positions of leadership. To have a cooperative bunch of people who can work together will be a valuable thing.

And that’s what I really love about this network. I’ve been to a few meetings with network members, and I’ve always been amazed at how down to earth and open everyone is. It feels like there is very little sense of competition or bravado among the members, despite many of them very successful in their careers so far. A genuine openness, and a modest passion for their areas of professional and personal interest.

The Foundation did well to set up plenty of activities during the Hui to get us all interacting. This included a trip to the terracotta warriors. This army of clay figures was impressive… 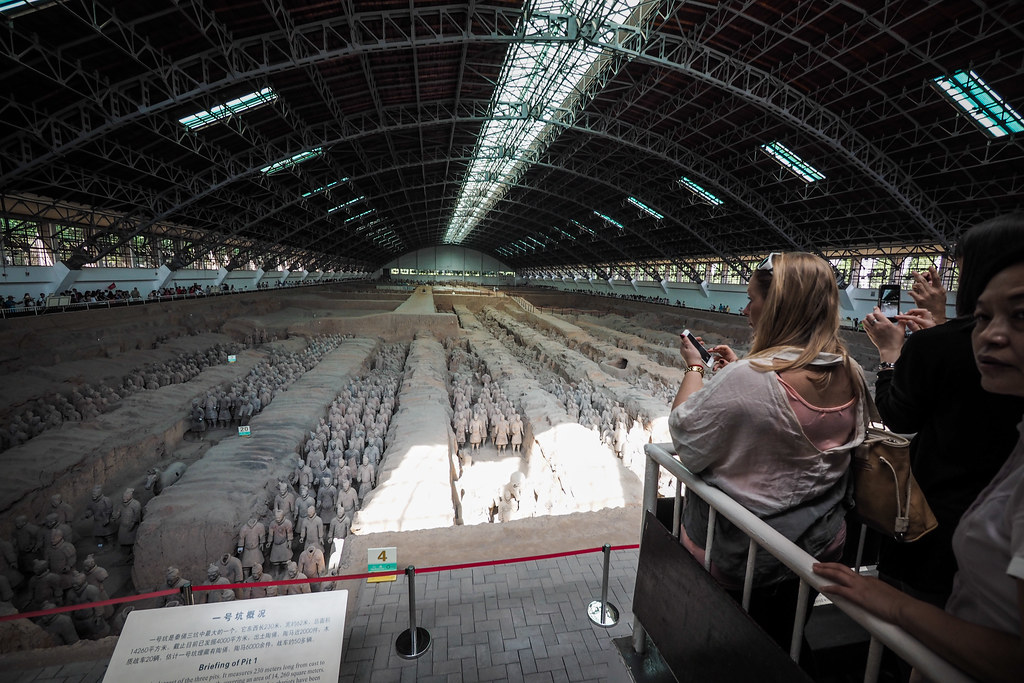 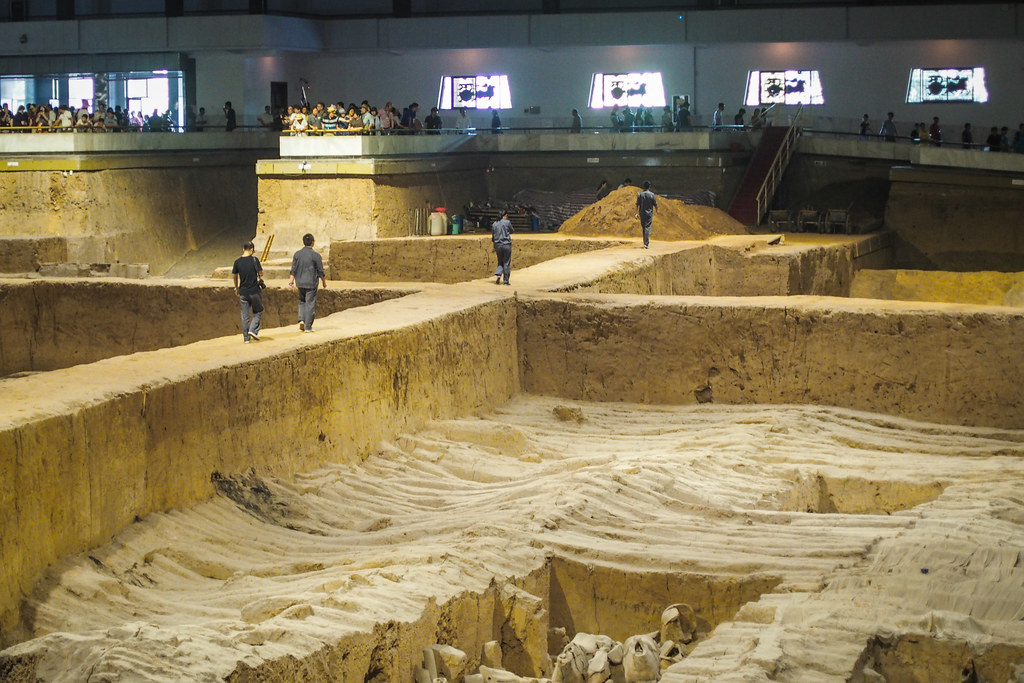 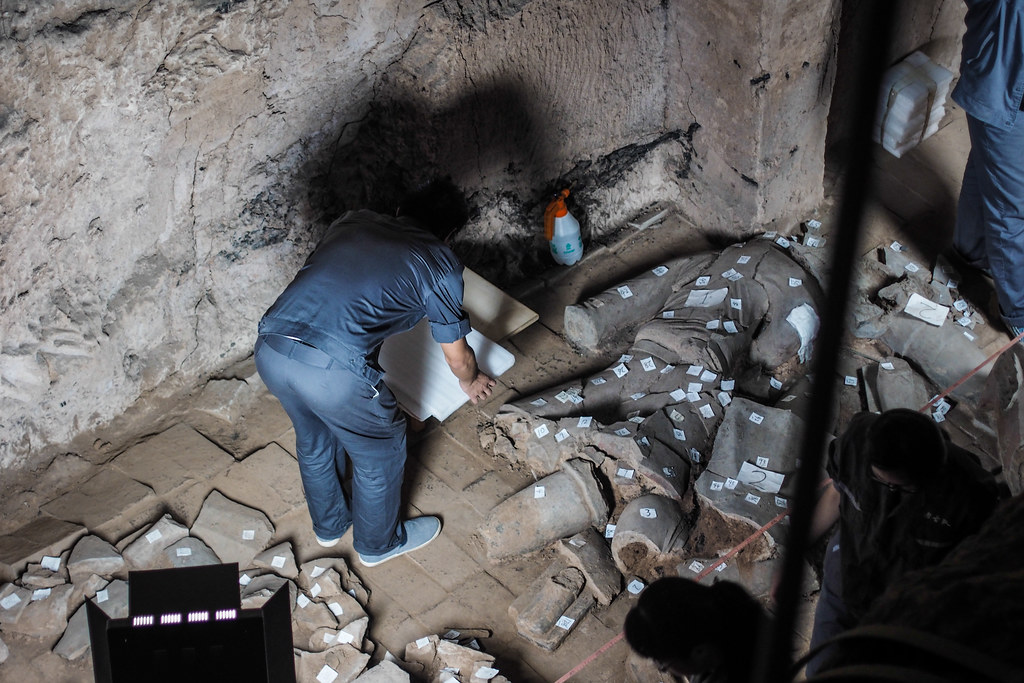 But I think I spent more time absorbed in discussion, getting to know others in the network that I had not met before this Hui, as well as catching up with old friends from previous meetings.

New Zealand Ambassador to China, Mr. John McKinnon, made for an intriguing tour guide! Thanks John 🙂 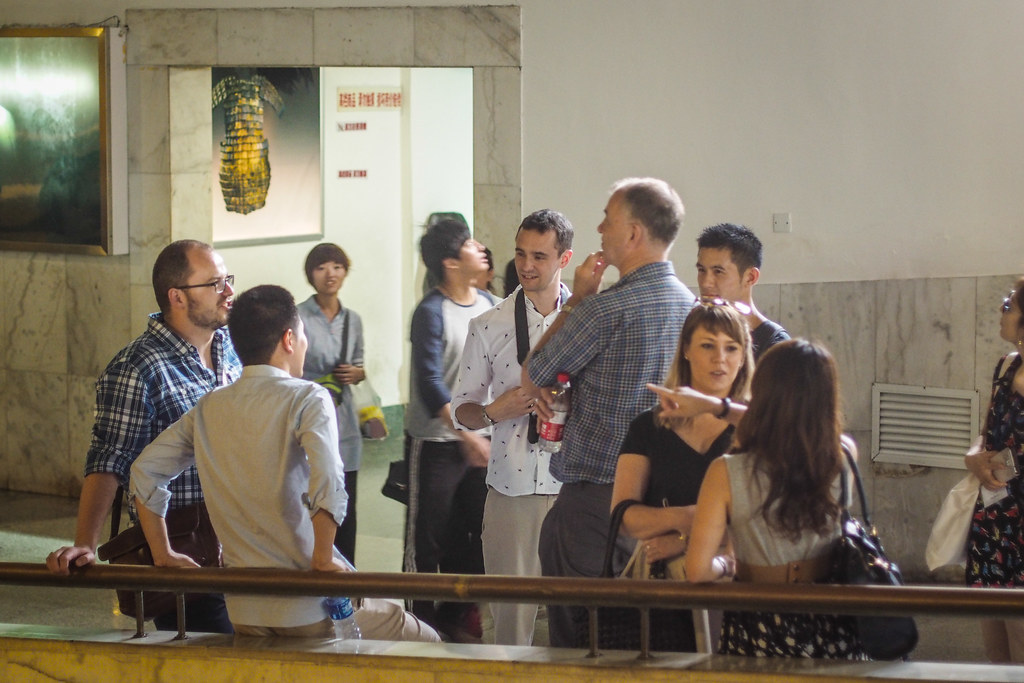 The meals were of course another highlight…once again I found myself torn between wanting to stuff my face and jabber to others at the table…two things that are unfortunately difficult to do at once! 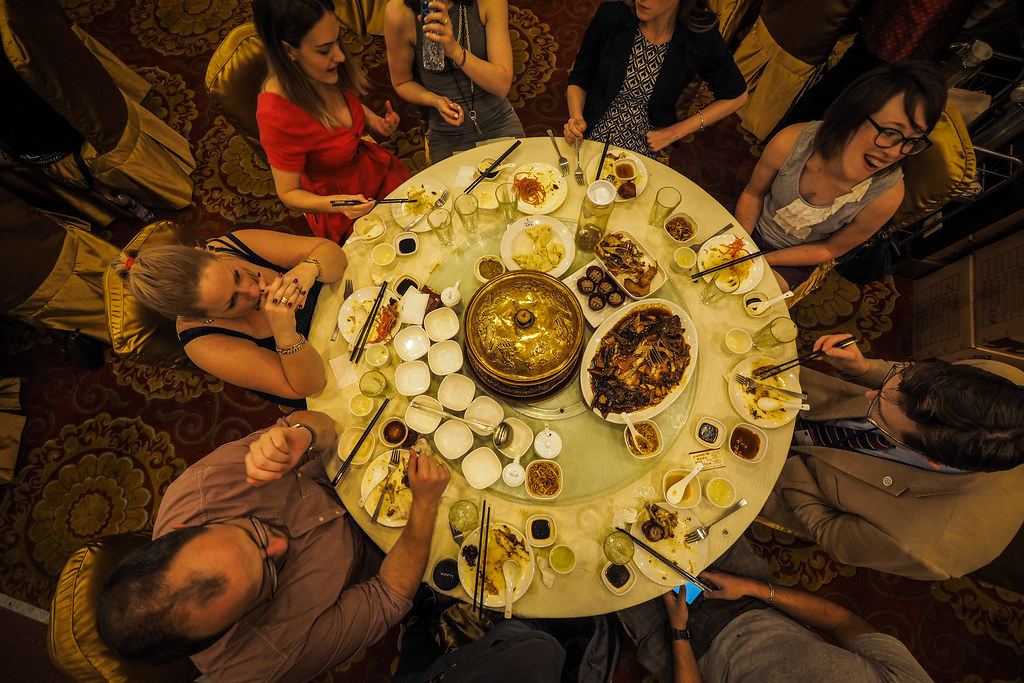 The three days of the Hui were over too fast, but to my great delight, we did manage to get some cycling in on the last afternoon. A few of us had heard about how it was possible to hire bikes to cycle the 14km around the old Xian city walls. I had originally thought that’d be at the street level, but no. We could actually cycle *on* the walls. 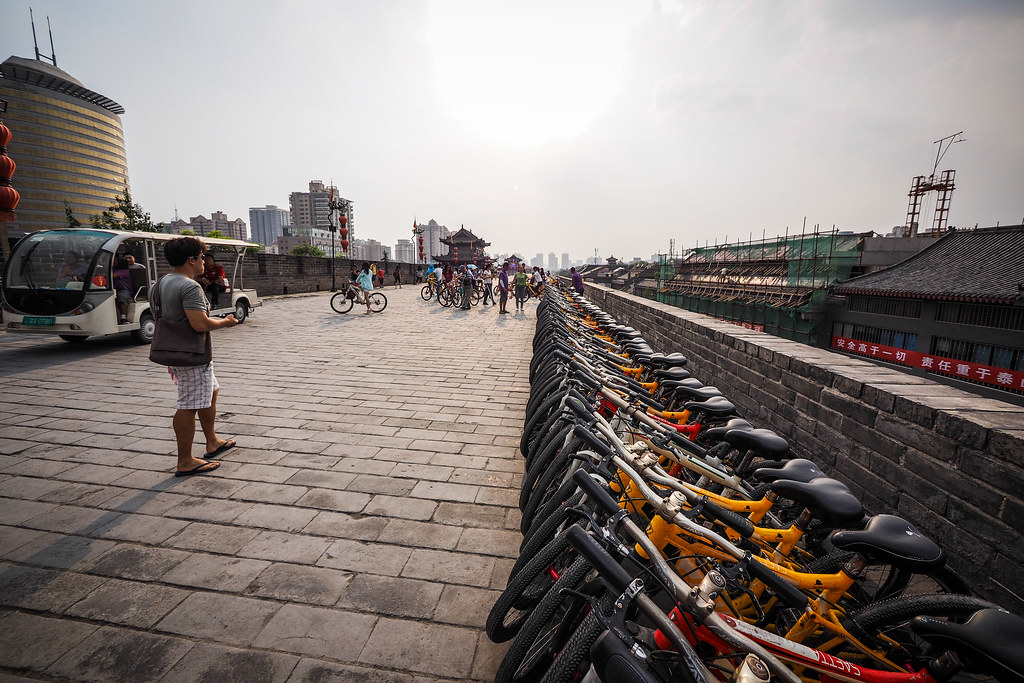 This gave us an expansive view over the old and new parts of central Xian, a sprawling fat-growing city of around 8 million people. 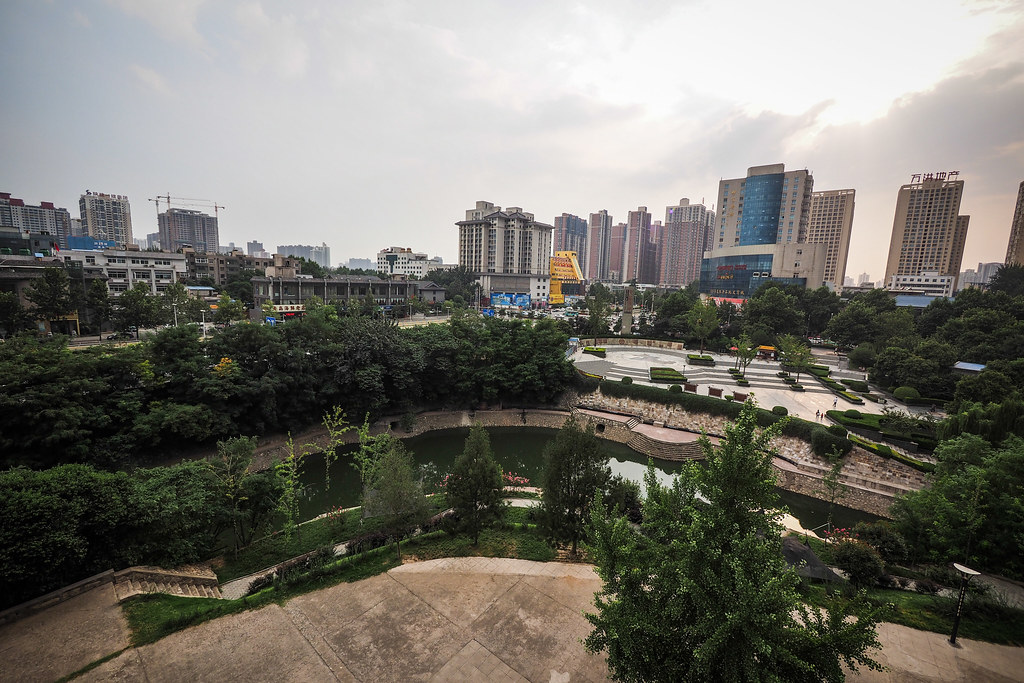 For the 30 minutes we spent cycling around half of the wall, we were enjoying a gentle tailwind and a generally dry heat of the afternoon. 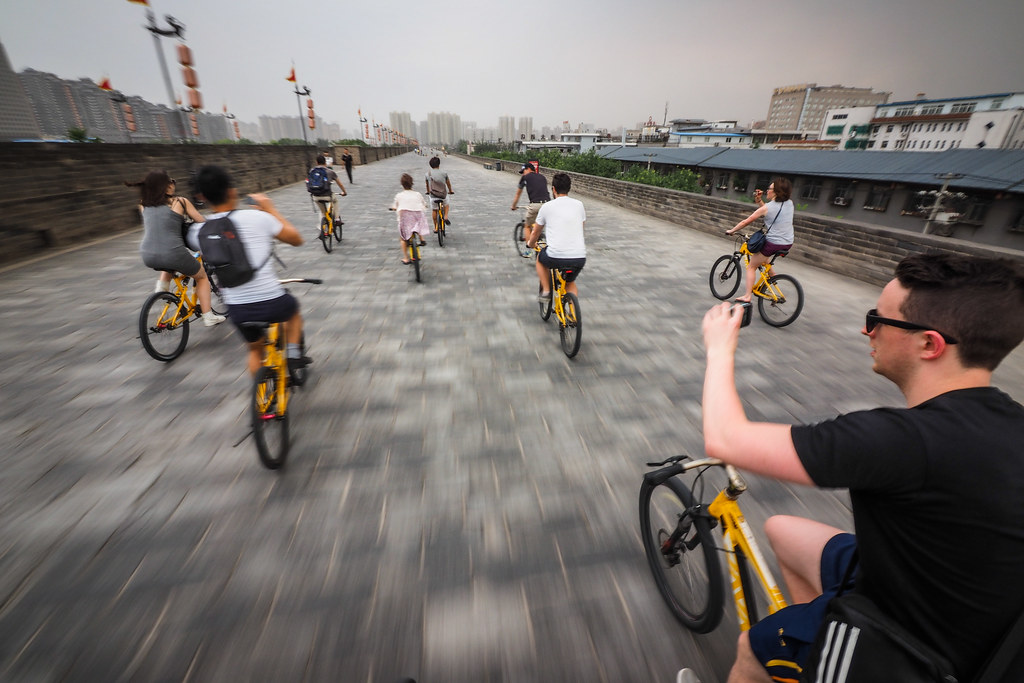 This didn’t last long, however. Around 5km into the ride, the sky in the northeast direction grew darker and darker. A gusty, sandy, hot wind grew in strength until I was squinting to keep dust out of my eyes. It was a classic sign of a coming squall that would end up dropping heavy rain for over an hour.

As the horizontal rain started flying in, we decided to cut the wall ride short, and escape while the rain wasn’t too intense. We were just in time. It felt like a fantastically adventurous end to a great few days. 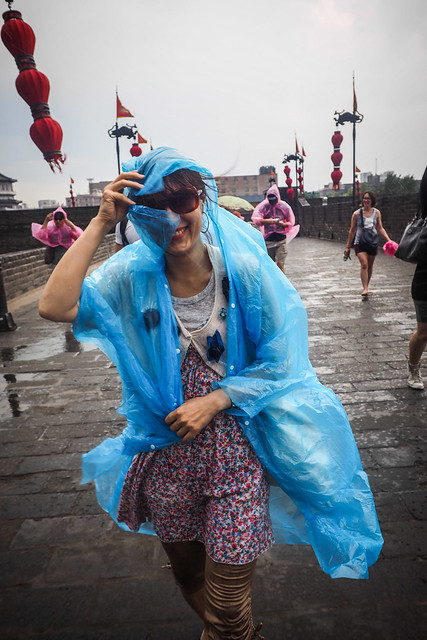 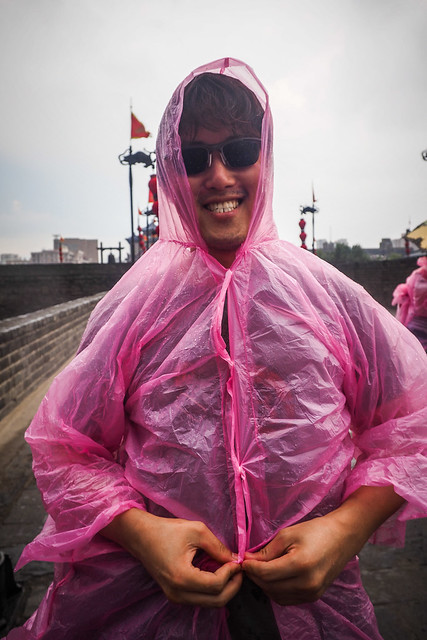 The three days felt like they were over before they started, but I appreciated the opportunity to deepen my ties with other people passionate about New Zealand and its relationship with Asia, and get back to China – that vibrant ever-changing place that it is.