Get in and support an awesome product for keeping people who longboard for transport clean and dry – Wheel Shields: http://www.kickstarter.com/projects/1522548247/wheel-shields-longboarding-technology

Way back in 2008, I was in western China sitting in a stifling internet cafe. I had already skated over 6,000 miles (9,600km) across the US and Europe, but in the previous days, I had spent a couple of days skating on wet roads, getting legs covered in road grime, yak shit, and slug guts. Some of the roads were also hard-packed dirt, which were still skateable when they were wet, but caused havoc on my shoes and clothes. This was a super frustrating issue. Sure, dirty pants and dripping wet shoes can be cool. But not when you want to sit down at a restaurant, cafe, internet cafe, someone’s chair in their house, etc. Sitting in that internet cafe, I thought up an idea for a fender/mudguard setup for a longboard. Below is the sketch I did in 2008, to explain the idea to my product-designer brother. “Can it be done?” I asked. He was confident that it could be done, but it would require a lot of work prototyping before a decent device could be created. The idea promptly got put in the too-hard-basket. Fast forward to 2012. I get an email out of the blue from Chase Kaczmarek from the US, asking for my opinion about his invention called Wheel Shields. He was developing them into a marketable product. I said that they are brilliant. A year later, he’s got a very elegant, refined product ready to produce. The one thing he’s not got is money to create the tooling to mass produce them. That’s where his Kickstarter Campaign comes in: http://www.kickstarter.com/projects/1522548247/wheel-shields-longboarding-technology. 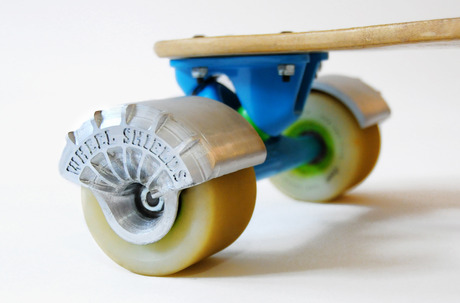 He needs US$25,000. He’s raised just over US$14,000 so far, with 11 days left in his fund-raising campaign. I’ve already pledged my support by ordering a set. I really want to get my set of Wheel Shields. It will mean that skating to school and work will be a reliable option, without having to worry about rain during the day creating wet roads. So do get in there and support a great idea and the masses of work that has gone into making them work: http://www.kickstarter.com/projects/1522548247/wheel-shields-longboarding-technology.

To be honest, I think for purely distance skaters, who are not concerned with wheelbite or ‘shoe-bite’ or stand-on-wheels-tricks, they are a little bit on the over-engineered side. For just ‘fender’ or mudguard applications, light plastic would be fine. But still, I do stand by my words: Wheel Shields are brilliant. Hands down the biggest innovation in longboarding in a long time. I wish I had Wheel Shields when I skated across the US, Europe and China. Wheel Shields have changed the longboard transportation paradigm forever. They are an elegant solution to a frustrating problem.

* The quote above was edited slightly on Chase’s Kickstarter page to keep things brief.
** I should also mention that I am in no way officially associated with Wheel Shields, or receiving compensation from them…